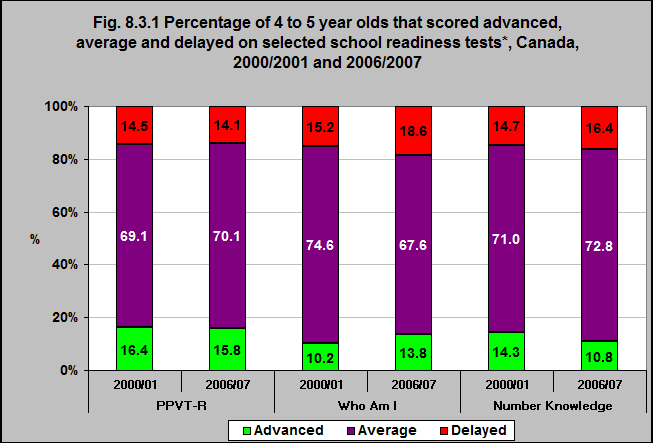 Notes:
*There are a number of measures of school readiness/academic ability among 4 and 5 year-olds.
The Peabody Picture Vocabulary Test (PPVT-R) assesses a child’s verbal ability and scholastic aptitude by having them look at pictures and identify the picture that matches a word spoken by an interviewer.
The Who Am I? test involves copying and writing tasks. The copying tasks in the assessment are designed to assess the child’s ability to conceptualize and reconstruct a geometrical shape. The writing tasks assess the ability of the child to understand and use symbolic representations such as numbers, letters and words. The child’s ability to complete the tasks depends on many factors including maturity, culture, experiences, and language skills.
The Number Knowledge test assesses a child’s ability to understand and use numbers

In 2006/07, the majority of children from 4 to 5 years of age demonstrated an ability to hear and understand vocabulary.

In 2006/07, the majority of children from 4 to 5 years of age demonstrated an ability to hear and understand vocabulary.