Home Modules Module 1 Section 1 Proportion of Canadian children and youth under 25 years speaking only a non-official language most often at home, by province and territory, 2006 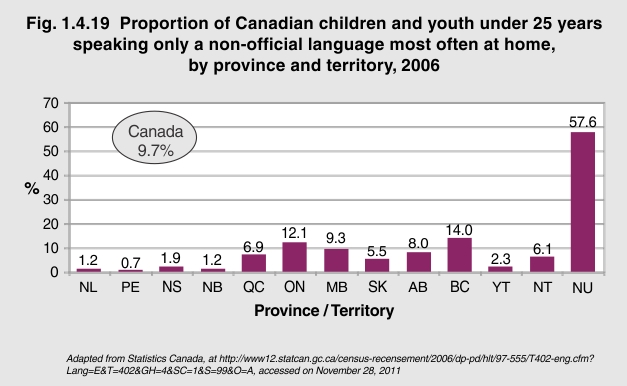 Language is the heartbeat of a culture. When a culture’s language is endangered, so are its stories, literature, songs, traditions and discourse. Most notably in Canada, the Quebecois have been battling English Canada for the protection and distinction of the French language and the Quebecois culture. In response, Canada’s official languages are French and English, which mandates that the federal government conduct its business in both official languages and provide government services in both languages. This includes encouraging provincial, territorial, and municipal governments to conduct themselves and to provide services in both English and French. The province of Quebec is officially French unilingual and is not required to provide services in English. The government provides grants and contributions to groups representing French-speaking minorities in the other provinces to assist with the establishment of an infrastructure of cultural support and services1.