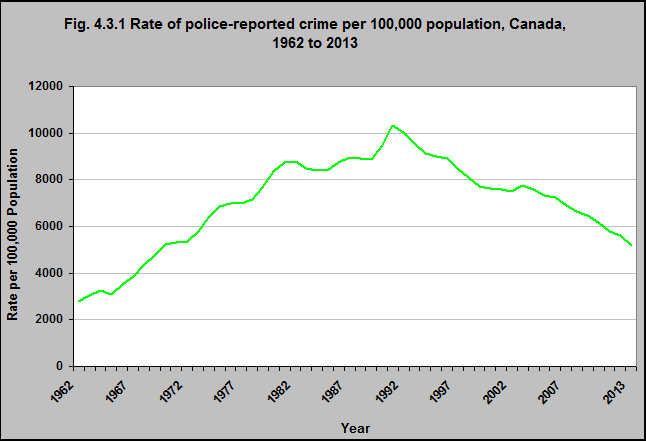 Between 1962 and 1991, the police-reported crime rate increased – it has decreased steadily since that time.

Since crime was first measured uniformly across the country, fluctuations have been noticed in the crime rate from year-to-year, but a major trend has been observed. From 1962 to 1991, the crime rate increased steadily, and then started to decline. This trend is most notable for property crime, but it is also the case for violent crime and other Criminal Code offences.

In 2013, the police-reported crime rate was at its lowest point since 1969. Experts have not reached a consensus on why crime has been declining since the 1990s, but several factors have been cited as possible explanations. These factors include an aging population, changing policing practices and strategies, the rise of technology, shifts in unemployment, variations in alcohol consumption, neighbourhood characteristics, or changing attitudes towards illegal and risky behaviour.

Despite the inability to identify a single factor which explains the crime rate decline in Canada, similar downward trends in crime rates have also been observed in other countries.

Between 1962 and 1991, the police-reported crime rate increased – it has decreased steadily since that time.