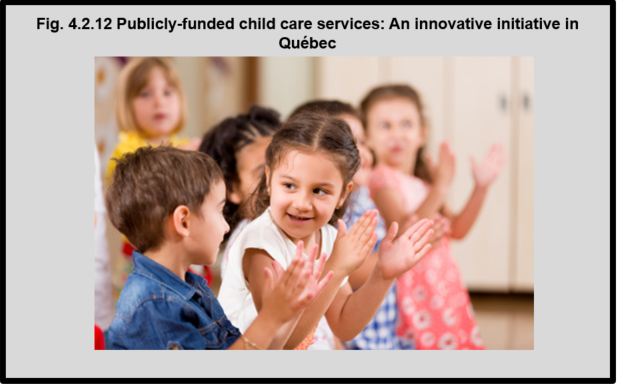 As the available data show, regulated child care is in short supply across Canada, with centre-based spaces covering fewer than 25% of children aged 0-5.1 Further, the availability of a space doesn’t make child care accessible for many or most families; parent fees may be as high as $20,000 a year2 and provincial fee subsidy systems aimed at low and modest income parents may still cost as much as $500 a month out-of-pocket even with a subsidy.2

A key critique of Canadian child care has long been that it relies heavily on parent fees while public funding is mostly directed to (as the Organisation for Economic Co-operation and Development (OECD) termed them) “inefficient” fee subsidies attached to individual families. This means that services are by-and-large left to fund core operating costs from these unreliable sources. As long ago as 2004, an OECD review of Canadian child care recommended “a move away from personal subsidy mechanisms toward operational funding and an entitlement for children…earmarked operational funding seems to be a surer means of ensuring more highly qualified personnel and enriched learning environments in centres – both of which are strong indicators of quality and learning”.3

Recent analysis of Canadian child care fees shows that provinces/territories using market-based child care fee schemes have much more unaffordable fees than do the three provinces that set maximum fees (Québec,
Manitoba, PEI) 2, with more funding directed to ‘services’ operating costs. Québec has been the best practice leader in Canada of a base-funded approach. In Québec, the bulk of service operating costs are funded through a provincial formula based on centre size and average occupancy.

Although “funding the service” rather than “funding the parent”4 is the norm in countries with more developed child care systems such as the Nordic countries, France or Italy, Québec’s move to a “fund the service” approach in the 1990s has been one of Canada’s most innovative child care initiatives. It has been key to Québec’s affordable, provincially-set parent fees, which were $5 a day when the program began and are now $7.55/day (as of 2017) with a maximum fee for higher income families.2 It has also contributed to Québec’s higher-than-Canadian-average availability of regulated spaces (spaces to cover 30% of 0-4 year olds in centres and almost 50% coverage when regulated home child care is included), stabilizing the non-profit centre de la petit enfance sector. As well, provision of more accessible child care has meant that Québec spends approximately 60% of Canada’s total annual public child care funding, bringing it closer to the internationally recommended minimum benchmark of 1% of GDP for child care services for 0-5 year olds.5