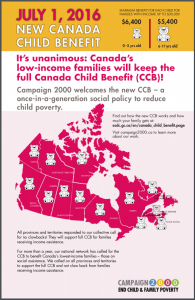 Anti-poverty organizations such as Campaign 2000 and Canada Without Poverty have historically taken a multi-faceted approach to alleviating poverty, including proposals for affordable housing, universal child care, good jobs, parent supports and adequate family income.5 A key component of these poverty reduction recommendations has long been a demand for a geared-to-income child benefit directed to families, robust enough to have an impact on family poverty.

In response to a 1989 unanimously supported motion in Parliament to eradicate child poverty by the year 2000, a child benefit was introduced across Canada.  Although the national child benefit was income-tested and targeted to lower-income children and was welcomed, it was not substantial enough to make a significant impact.

The Canada Child Benefit: Innovating to “help with the high cost of raising kids”

The federal government re-purposed the two components of the national child benefit, the Canada Child Tax Benefit and the National Child Benefit Supplement. These funds, together with funds from the cancelled flat-rate ($100/month for each child under age six) Universal Child Care Benefit and from cancelling income splitting between parents with children younger than 18 years were used to create a new geared-to-income Canada Child Benefit (CCB) beginning in mid-2016.

The maximum CCB is $6,400/year per child under six years ($5,400/year per child six to 17 years). The tax-free benefit is determined on a sliding scale up to a family income of $189,000, when it ceases. With the CCB as a key element in a new poverty reduction strategy, the federal government has committed to reduce child poverty by 40% by 2017.6

Social policy experts have pointed to two necessary policy elements needed to ensure that the CCB will be effective in reducing child poverty. First, provincial governments should not “claw it back” (that is, reduce provincial social assistance payments by a similar amount). Second, the benefit must be indexed to inflation. The federal government has agreed that the CCB will be indexed beginning in 2020 and currently, all provinces/territories have agreed not to “claw back” the CCB from low income families on social assistance.7