Home Modules Module 7 Section 5 Distribution of parents/guardians of Inuit children under age 6 on their feelings about various aspects of home and daily life, Canada, 2006 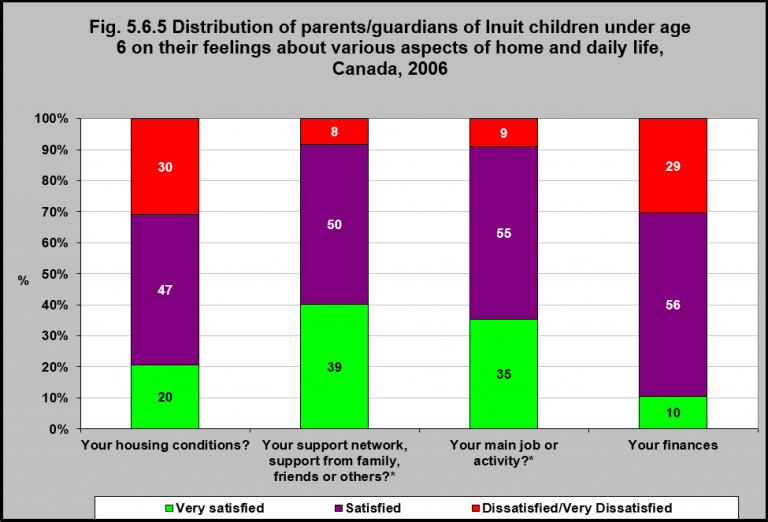 Notes:
*Very dissatisfied use with caution
Percents may not add up to 100 because responses of ‘don’t know’, ‘refusal’ and ‘not stated’ were included in the calculation of all estimates and rounding. Additionally, ‘not stated’ and ‘not applicable’ responses were removed.
Four regions comprise Inuit Nunangat which means “Inuit homeland” in the Inuit language. These four regions are: Nunatsiavut in northern Labrador, Nunavik in northern Quebec, the territory of Nunavut, and the Inuvialuit region in the Northwest Territories.

Parents/guardians of Inuit children generally have lower levels of satisfaction than parents/guardians of First Nations children living off-reserve with regards to key determinants of health such as housing conditions, support networks, jobs, and income. Inuit are more likely than other Canadians, including Indigenous families living off reserve and Métis, to live in poor quality or overcrowded homes and in poverty, and they lack employment generating opportunities and face higher costs of living, placing Inuit children at increased risk of poorer health outcomes.1 This highlights the need for a more holistic approach to addressing health inequities for Inuit families.