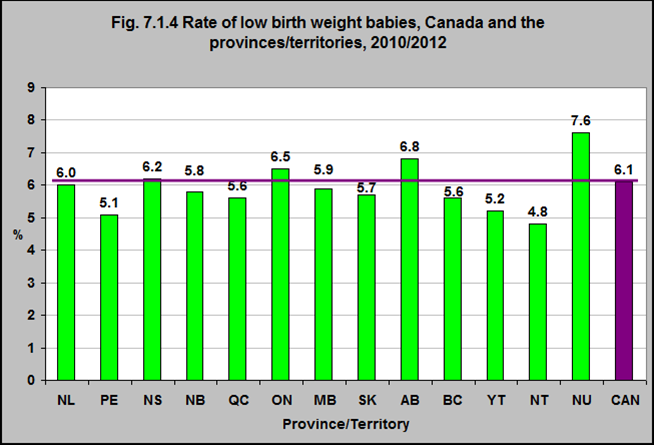 Low birth weight is considered an important health indicator, because it is linked with many health problems across the life span.1

Babies who are born with low birth weight are born either at term or before term. Because they are not a homogeneous group, risk of their physical and developmental health problems varies.  The majority of low birth weight babies have normal outcomes, however, as a group they have higher incidences of below average growth, illnesses and neurodevelopmental problems, such as cognitive, attention and neuromotor functioning. These problems persist into adolescence. Those babies with the lowest birth weight have the highest risks. Low birth weight babies who live with socioeconomic/demographic risk have a higher likelihood of having cognitive problems that persist as the child grows. Programs that provide interventions and enrichment for these children help optimize their development.2  Therefore, it is important that the provinces/territories have such programs to support these infants and children.