Home Modules Module 8 Section 7 Proportion of 4 to 5 year olds who scored high on the physical aggression and indirect aggression scores, by select characteristics, 2010/2011 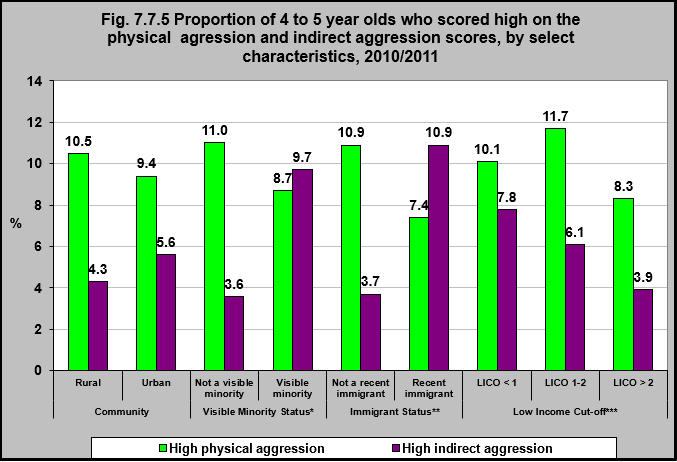 Use with caution: Visible minority, high hyperactivity/inattention score; Recent immigrant, high emotional disorder-anxiety score; Recent immigrant, high hyperactivity/inattention score. High/low behaviour was determined by the 10th/90th percentile cutpoints (as appropriate).Physical aggression was defined as conduct disorder (i.e. violating the basic rights of others, disregarding age‑appropriate social norms) or physical aggression (e.g., kicking or hitting other children) for ages 4 to 5.Indirect aggression is defined as non‑physical behaviour to cause harm to others. It includes behaviours such as gossiping and social exclusion.

*Visible Minority Status: This category includes persons who are non-Caucasian in race or non-white in colour and who do not report being Aboriginal.

***Low Income Cut-off (LICO): an income threshold below which a family will likely devote a larger share of its income on the necessities of food, shelter and clothing than the average family. The approach is essentially to estimate an income threshold at which families are expected to spend 20 percentage points more than the average family on food, shelter and clothing.

For details on how these scores are developed see The Survey of Young Canadians (SYC) http://www23.statcan.gc.ca/imdb/p2SV.pl?Function=getSurvey&SDDS=5179 -accessed June 22, 2017.