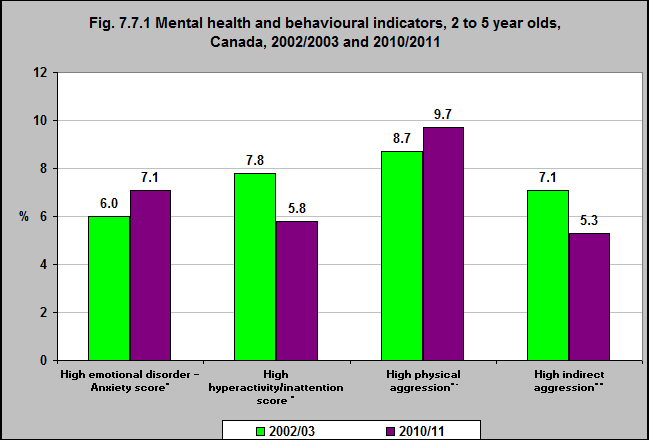 Notes:
*2 to 5 years
**4 to 5 years
Physical aggression was defined as conduct disorder (i.e. violating the basic rights of others, disregarding age‑appropriate social norms) or physical aggression (e.g., kicking or hitting other children).
Indirect aggression is defined as non‑physical behaviour to cause harm to others. It includes behaviours such as gossiping and social exclusion.
High/low behaviour was determined by the 10th/90th percentile cutpoints (as appropriate).

For details on how these scores are developed see The National Longitudinal Survey of Children and Youth (NLSCY) http://www23.statcan.gc.ca/imdb/p2SV.pl?Function=getSurvey&SDDS=4450 -accessed June 22, 2017; and, the Survey of Young Canadians (SYC) http://www23.statcan.gc.ca/imdb/p2SV.pl?Function=getSurvey&SDDS=5179 -accessed June 22, 2017.