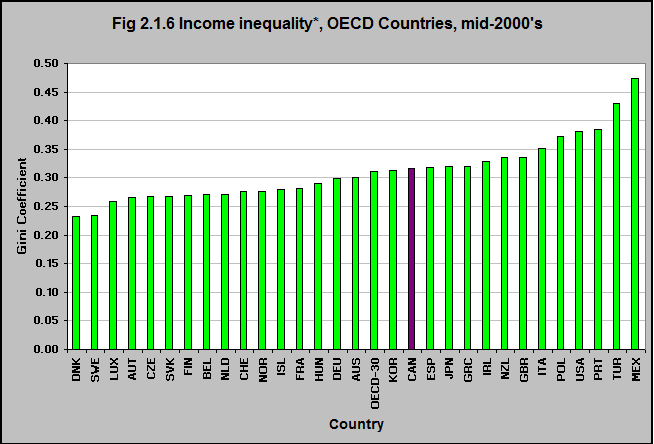 *As measured by the Gini-Coefficient. The Gini index is a measurement of the income distribution of a country’s residents. This number, which ranges between 0 and 1 and is based on residents’ net income, helps define the gap between the rich and the poor, with 0 representing perfect equality and 1 representing perfect inequality.

Canada is among the Organisation for Economic Co-operation and Development (OECD) nations with higher income inequality.

According to a report by the OECD, Canada is one of the two wealthy countries out of 30 showing the largest increases in income inequality from the 1990s to the mid-2000s.

**Market income is the total income before tax minus income from government sources. http://www12.statcan.gc.ca/census-recensement/2006/ref/dict/pop069-eng.cfm -accessed July 20, 2017.

Canada is among the Organisation for Economic Co-operation and Development (OECD) nations with higher income inequality.