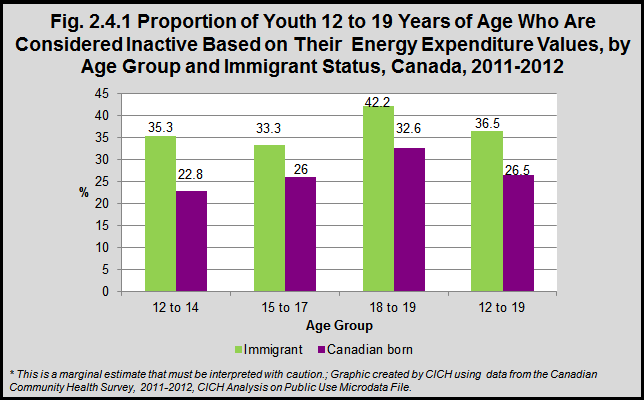 An important determinant of health for young people is involvement in regular physical activity. These findings are substantiated by analysis of the Canadian Health Behaviour in School-Aged Children’s survey data, which found that youth born outside of Canada were less likely to be active than peers born in Canada.1  This study also found that time since immigration and ethnicity were associated with participation in physical activity – specifically that the longer the youth were in Canada the more likely they were to have physical activity levels that were close to their Canadian born peers.  In addition, East and South-East Asian youth were less likely to be physically active than Canadian born youth.

1Kukaswadia A, Pickett W and Janssen I.  Time Since Immigration and Ethnicity as Predictors of Physical Activity among Canadian Youth: A Cross-Sectional Study. PLOS ONE February 2014; 9:2.  http://www.plosone.org/article/fetchObject.action?uri=info%3Adoi%2F10.1371%2Fjournal.pone.0089509&representation=PDF