Home Modules Module 4 Section 1 Trends in the No. of Cdn Newcomers < 25 Who Are Permanent Residents, by Imm Category, '03-'12 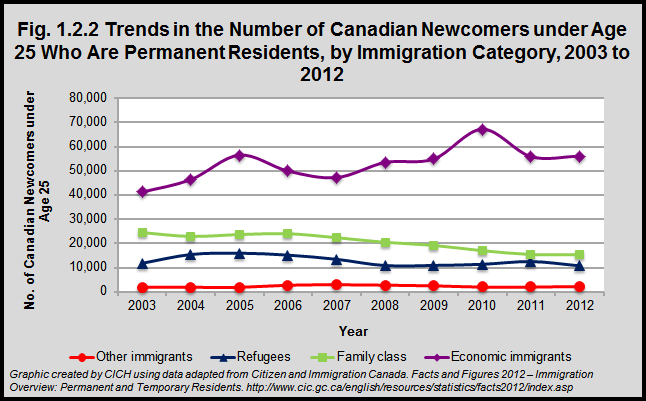 Immigrants to Canada are grouped into four classes: Economic, Family, Refugee and Other.
Economic Immigrants: “Permanent residents selected for their skills and ability to contribute to Canada’s economy.”1

Family Immigrants: “Permanent residents sponsored by a Canadian citizen or a permanent resident living in Canada who is 18 years of age or over. Family class immigrants include spouses and partners (i.e., spouse, common-law partner or conjugal partner); parents and grandparents; and others (i.e., dependent children, children under the age of 18 whom the sponsor inteds to adopt in Canada, brothers, sisters, nephews, nieces, and grandchildren who are orphans under 18 years of age, or any other relative if the sponsor has no relative as described above, either abroad or in Canada). Fiancés are no longer designated as a component of the family class under the Immigration and Refugee Protection Act.”1 The definition of ‘dependent child’ changed in 2014 to include children under 19 rather than children under 22.2

Other: “Permanent residents in the other immigrant category include post-determination refugee claimants in Canada, deferred removal orders, retirees (no longer designated under the Immigration and Refugee Protection Act), temporary resident permit holders, humanitarian and compassionate cases, sponsored humanitarian and compassionate cases outside the family class, and people granted permanent resident status based on public policy considerations.”1

2Citizenship and Immigration Canada. Notice – Changes to the definition of a dependent child. http://www.cic.gc.ca/english/department/media/notices/2014-06-23.asp